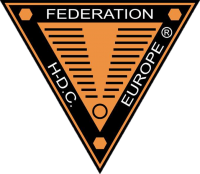 Who is the Harley-Davidson-Club FREE WHEELING KEMPEN?

More than 40 years ago in a bar in Tessenderlo some people decided to offer the Harley-Davidson riders from the Kempenland in Belgium the opportunity to meet other Harley-riders in a club.

The starting shot was given on February 20th, 1983. Our members rode in the wind on national and international roads, under the wings of the Belgium Harley-Davidson-club ’74, as “Kempen Region”.

During winter-time 1984 – 1985, we made the first international contacts with other clubs from surrounding countries during an international Presidents Meeting.

In 1987, with some experience in our bones, we decided to leave the Belgium Harley Davidson club ’74 and to stand on our own legs. On February 19th, 1987, with the official publication in the Belgian Statute Book the Harley-Davidson-club Free Wheeling Kempen ( identification number 2618/87 ) was born. Due to new Belgian legislation, new and actual statutes were published in the Belgian Statute Book on December 29th, 2005.

On November 15th, 1991, our club met with several other Harley-Davidson-clubs at the annual Presidents Meeting in Feldkirch (Austria). Together with a descendant from The Family ( Bill Davidson in person ), we stood at the cradle of the Federation of Harley-Davidson-clubs in Europe (F.H.D.C.E.). The international acknowledgement was definitive!

Since the beginning of this year our club counts 73 members : 43 of them own a Harley Davidson, are active members and have the right to vote. 30 of them are associated members.

Our club is a democratic association. The club is conducted according the Belgian laws. The committee exists of five chosen members, with responsibilities that we will explain later on. Yearly, two or three members of the committee are eligible.

History of the International Rally

In the summer of 1984, only one year after the starting shot and without any experience, our club decided to organize its first International Rally for Harley-Davidson owners. The venue was set on a soccer terrain in the town of Balen, near to the borderline of the town of Leopoldsburg. A little promotion campaign had an outcome of 250 participating people. They gave us a lot of credit about the organization. The club succeeded in a good organized party where all kind of Harley-bikers felt themselves at home.

During the period 1984 till 1997 the Rally had grown larger and larger and had become “ a classic event “ in the Europe Harley-Davidson community. In the meantime the local, national and international press had discovered our rally and wrote praiseful articles about our typical Harley-sphere in the country of the Harley-Davidson-club Free Wheeling Kempen …

In 1996 and 1997 the number of attendants to the rally grew to above 5.000. The villagers saw ( at a rough estimate ) more than 10.000 visitors in their streets. The local shop owners and bar-tenders where excited about the success of the international rally.

But, at the other side, behind the great success of the rallies, there was a lot of pressure to the organizers : more spectacles, more visitors, more expectations and … more things to worry about.

After the 14th edition in 1997, the committee was under the impression that the club had reached its organizing limits with this mass-event. The choices were that we could go on with less quality, we could go on in a smaller way or we could quit with the organization of the rally. Something had to be chosen …

The general meeting in February 1998 decided to stop organization of a rally from that point on. The club needed a break for a few years. After a rest-cure we might think about a new organization on a smaller scale.

In February 2000, the hunger for a rally grew to the point that we decided to put the organization of an annual rally on our calendar again. During the weekend from Friday, August, 4th till Sunday August, 6th, 2000, our club welcomed 384 partying friends from six different European countries at a venue in Arendonk. Many well-known attendants enjoyed “ the good old days “.

In 2001 we moved to a new venue in Retie. Thanks to the good co-operation with the municipal service, federal and local police, fire department and many other parties, our club could welcome its friends at the new festive grounds near Duinberg. The rally turned into a big success ! Traditional silly-games, a ride-out, good rock and blues music, striptease and a nice chat around the campfire made it very cosy. Many long-time Harley-riders from neighbor countries and as far away as Norway, Scotland and even the U.S.A. came to taste the atmosphere and rode home on Sunday with a good feeling.

The Harley-Davidson-club Free Wheeling Kempen did it again and from 2002 till 2012 the international rally became the classic “happening” where hundreds of bikers are looking out for. In 2013 guests from all over Europe partied with us at International Rally celebrating the 30th Anniversary of our club and made it unforgettable … it was absolutely a splendid one ! Thanx to ya all, folks !!!

Now, the year 2022 has come and for months now we are working our butts off to present you our happening from August 04 till August 06, 2023. Our guests won’t believe their eyes and ears. The organizers of the 35th International Harley-Davidson & Indian Rally know what their guests want, so we’ll give it to them: more music, more heat, more beer,more steam, more … For sure bigger, better and greater than ever!!!

Welcome to the fun!